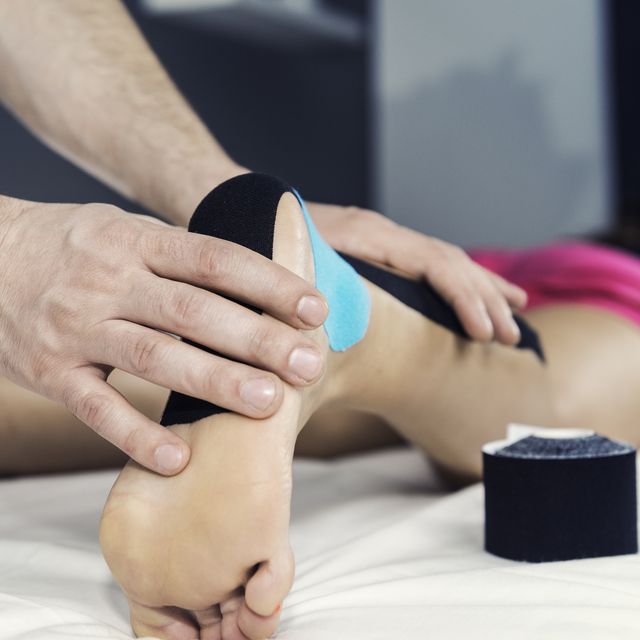 KT tape is a form of taping used to treat a number of different foot problems. Taping can help relieve pain in the heels and ankles, improve circulation, and stabilize the feet. This is why it’s used to treat plantar fasciitis, bunions, and more.

KT Tape is a brand of taping that helps reduce inflammation and pain in the plantar fascia. It has become a popular method of treating plantar fasciitis.

The plantar fascia is a thick band of connective tissue that connects the heel bone to the toes. This band is usually elastic and springy, but can be damaged by excessive strain. Plantar fasciitis can cause pain in the bottom of the foot, which is usually worse after long periods of sitting.

KT Tape is used to help reduce the inflammation of the plantar fascia and support the arch. It is a stretchable material that is less harsh on the skin than regular athletic tape.

It can be used as a stand-alone treatment or combined with other treatment methods. It can help relieve the pain associated with plantar fasciitis and speed up recovery time.

In the study, 84 patients with plantar fasciitis were randomized into two groups: one group received KT and the other group received ESWT. Both groups were treated once a week for six weeks. The mean thickness of the plantar fascia decreased in both groups. However, changes were not statistically significant.

QUICK TAPE(r) foot support straps are designed to help relieve tension on the plantar fascia, as well as reduce stress on the knees and hips. They can be worn barefoot, in a shoe, or during exercise. They can also be used to help prevent injuries to the feet.

They are easy to apply and are effective in reducing pain associated with plantar fasciitis. They are also inexpensive, and can be used on any foot. They can be worn at night or during the day.

QUICK TAPE(r) is a one-piece foot strap that is made of adhesive fabric. The adhesive fabric holds the heel and ball of the foot together, and is also strong enough to resist slippage due to shear stress.

The first piece of tape should be wrapped from the inside of the foot, across the heel, and to the outside. It should finish near the knuckle of the little toe. The second piece should be pulled over the first piece, and then overlapping half of it.

Using Low Dye Kt Tape for Plantar Fasciitis is a great method to stabilize the arch of the foot. This allows the soft tissue to heal and function properly.

Low Dye Kinesio-banding therapy is effective in improving foot function when used early in the treatment of plantar fasciitis. However, it does not offer significant benefits in pain.

The Low Dye tapeing group consisted of fifteen patients. The average height was 169.1+-5.7 cm and weight was 64.8+-6.0 kg. During the study, they were taped three times per week for six weeks.

Heel spurs on the toe side of the heel

Among the most common deformities in the feet are heel spurs. This condition is caused by an excess of calcium deposit in the calcaneus. Symptoms include sharp pain in the heel, which may also cause swelling and inflammation.

Heel spurs are commonly associated with plantar fasciitis. They are also known as osteophytes. They form at the bottom of the heel and can grow up to half an inch in length. They are often seen in athletes.

Heel spurs are caused by repetitive stress on the foot, which can be exacerbated by wearing inappropriate shoes. Repetitive stress can be caused by walking or running on hard surfaces, jumping, or wearing shoes that do not provide sufficient support.

Heel spurs can also be caused by trauma to the heel. If you are experiencing pain in the heel, you should stop all activities and consult a doctor. Heat therapy may be used to loosen tense muscles and promote blood and oxygen flow to the affected area.